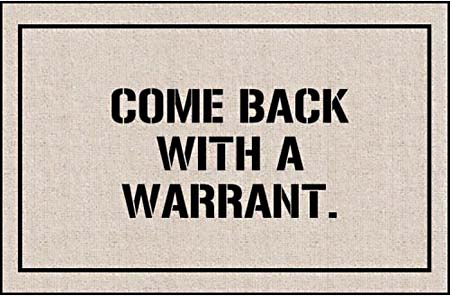 What is your Fourth Amendment Rights?

Your Fourth Amendment Right Protects You from Unreasonable Searches and Seizures. The Fourth Amendment (Amendment IV) to the United States Constitution is the part of the Bill of Rights which guards against unreasonable searches and seizures, along with requiring any warrant to be judicially sanctioned and supported by probable cause. It was adopted as a response to the abuse of the writ of assistance, which is a type of general search warrant, in the American Revolution. Search and arrest should be limited in scope according to specific information supplied to the issuing court, usually by a law enforcement officer, who has sworn by it.

The Fourth Amendment has been held to mean that generally a warrant must be judicially sanctioned for a search or an arrest. In order for such a warrant to be considered reasonable, it must be supported by probable cause and be limited in scope according to specific information supplied by a person (usually a law enforcement officer) who has sworn by it and is therefore accountable to the issuing court. However, a dissenting school of thought often found in the opinions of Justice Antonin Scalia is that searches must simply be “reasonable,” and the warrant requirement has been overly emphasized.

When police conduct a search, the amendment requires that the warrant establishes probable cause to believe that the search will uncover criminal activity or contraband. They must have legally sufficient reasons to believe a search is necessary. In Carroll v. the United States, 267 U.S. 132 (1925), the Supreme Court stated that probable cause to search is a flexible, common-sense standard. To that end, the Court ruled in Dumbra v. United States, 268 U.S. 435 (1925), that the term probable cause means “less than evidence that would justify condemnation,” reiterating Carroll’s assertion that it merely requires that the facts available to the officer would “warrant a man of reasonable caution” in the belief that specific items may be contraband or stolen property or useful as evidence of a crime.[38]. It does not demand any showing that such a belief be correct or more likely true than false. A “practical, non-technical” probability that incriminating evidence is involved is all that is required.[39] In Illinois v. Gates, 462 U.S. 213 (1983), the Supreme Court ruled that the reliability of an informant is to be determined based on the “totality of the circumstances.”

The standards of probable cause differ for an arrest and a search. The government has a probable cause to make an arrest when “the facts and circumstances within their knowledge and of which they had reasonably trustworthy information” would lead a prudent person to believe that the arrested person had committed or was committing a crime. Probable cause to arrest must exist before the arrest is made. Evidence obtained after the arrest may not apply retroactively to justify the arrest.

The Fourth Amendment proscribes unreasonable seizure of any person, person’s home (including its curtilage) or personal property without a warrant. A seizure of property occurs when there is meaningful interference by the government with an individual’s possessory interests, such as when police officers take personal property away from an owner to use as evidence. The Amendment also protects against unreasonable seizure of their persons, including a brief detention.

A seizure does not occur just because the government questions an individual in a public place. The exclusionary rule would not bar voluntary answers to such questions from being offered into evidence in a subsequent criminal prosecution. The person is not being seized if his freedom of movement is not restrained. The government may not detain an individual even momentarily without reasonable, objective grounds, with few exceptions. His refusal to listen or answer does not by itself furnish such grounds.

A person is seized within the meaning of the Fourth Amendment only when by means of physical force or show of authority his freedom of movement is restrained, and in the circumstances surrounding the incident, a reasonable person would believe that he was not free to leave. As long as the police do not convey a message that compliance with their requests is required, the courts will usually consider the police contact to be a “citizen encounter” which falls outside the protections of the Fourth Amendment. If a person remains free to disregard questioning by the government, there has been no intrusion upon the person’s liberty or privacy under the Fourth Amendment — there has been no seizure.

Under the Fourth Amendment, law enforcement must receive written permission from a court of law, or otherwise qualified magistrate, to lawfully search and seize evidence while investigating criminal activity. A court grants permission by issuing a writ known as a warrant. A search or seizure is generally unreasonable and unconstitutional if conducted without a valid warrant, and the police must obtain a warrant whenever practicable. Searches and seizures without a warrant are not considered unreasonable if one of the specifically established and well-delineated exceptions to the warrant requirement applies.